Our first week in FS2!

This week the children have spent their first few mornings and full day today in FS2! Myself and Mrs Armitage have been so impressed with how well the children have settled, learning the new routines and exploring the indoor and outdoor environments.

The children have enjoyed their two PE lessons, practicing their hopping, skipping and jumping- very tricky skills to master!

One of the highlights of the week has been lunch times! The children have taken it all in their stride, learning how to collect their tray and food. The lunch time team have been incredibly impressed with the lovely manners of the children and how quickly they have learnt the new routine. Well done FS2, a very successful first week. We look forward to seeing you all on Monday!

Parents please see Tapestry for some photographs of the week.

Introduction to RE at St Joseph’s

This week we began our first RE topic. God’s World. To start the topic we listened to the story “Guess how much I love you” and discussed how much the hares loved one another. We then thought about who loves us and who we love. The children said their families, friends and teachers.

We then learnt how much God loves us all and considered how big this love was. We had lots of fantastic answers, some of them I have written below.

“God’s love for me is bigger than a rainbow”

We then showed how big this loved looked to us. 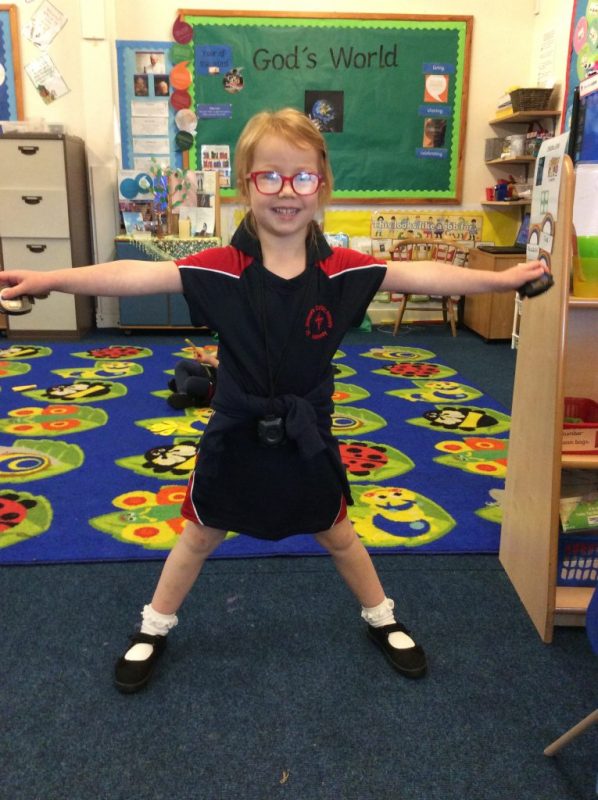 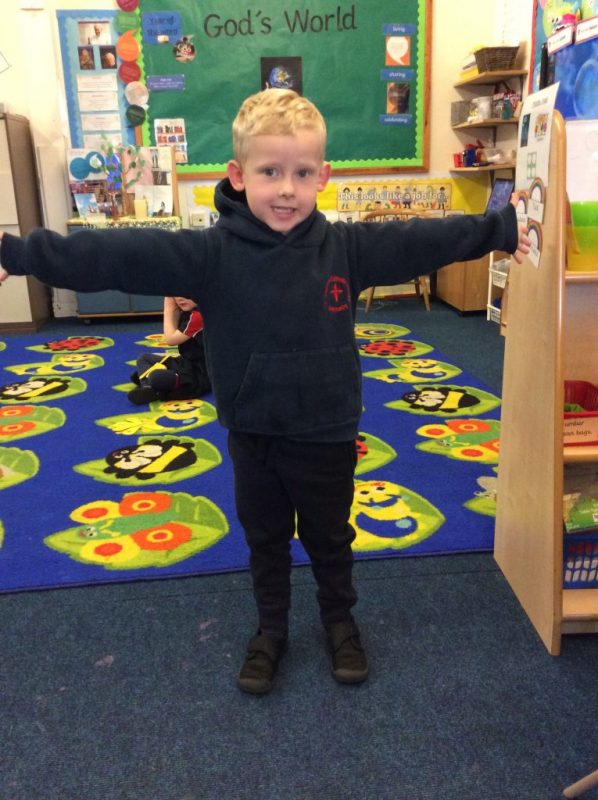 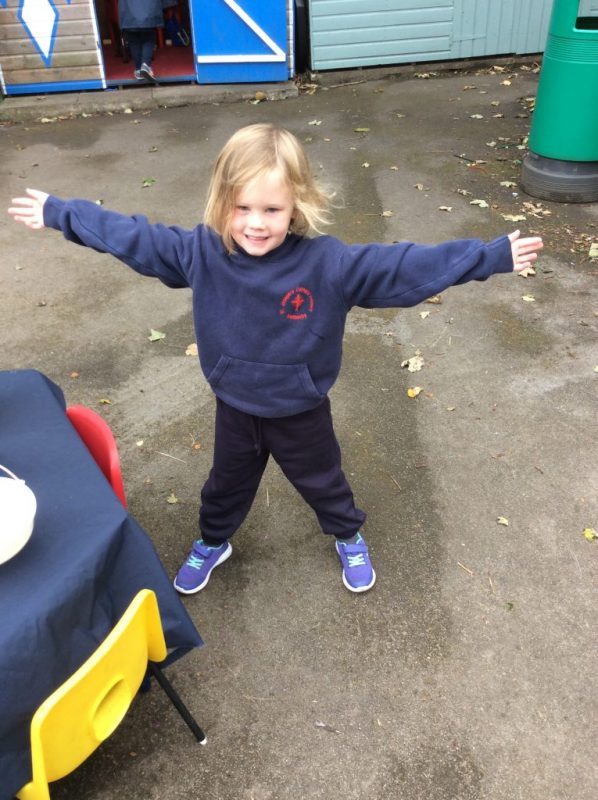 God created the world in 7 days

This week we learnt about how God created the world in 7 days. The children enjoyed asking lots of questions and used a Rainbow to identify all the different things that God made.

The children then put actions to each day to help them remember each key part of the world that God created. 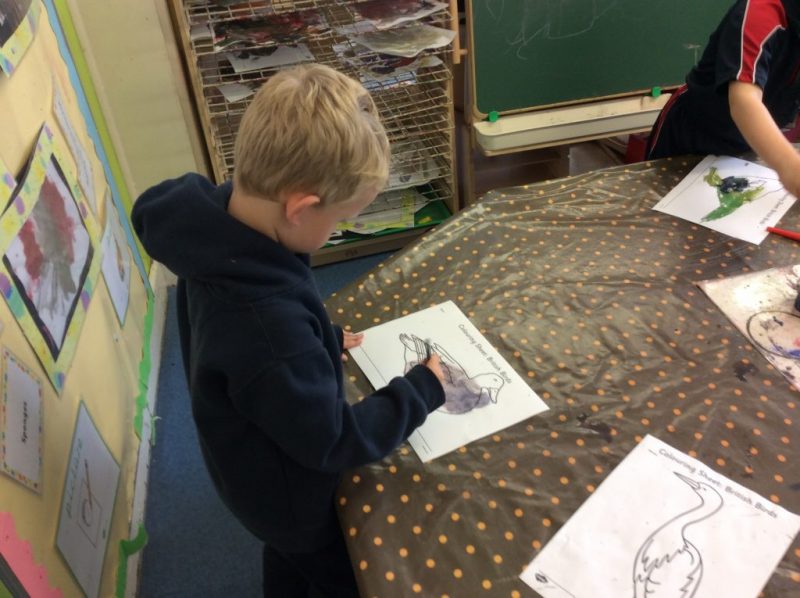 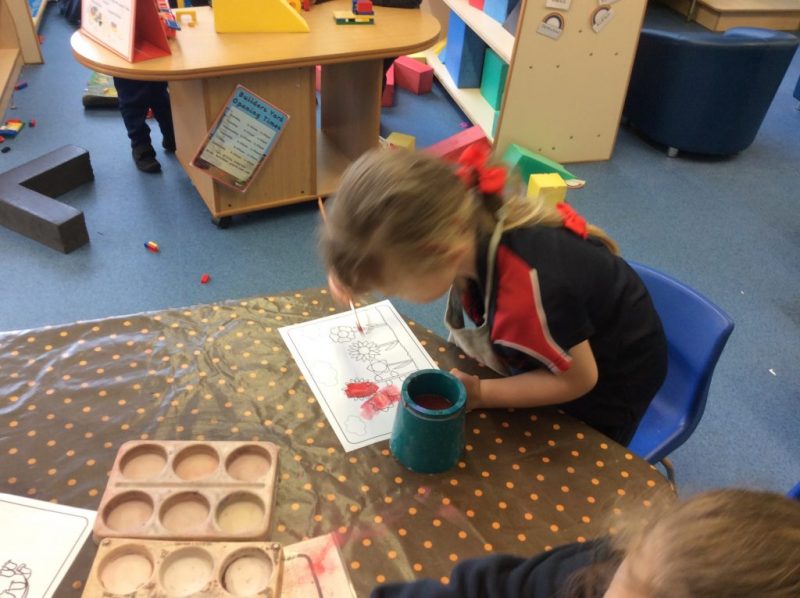 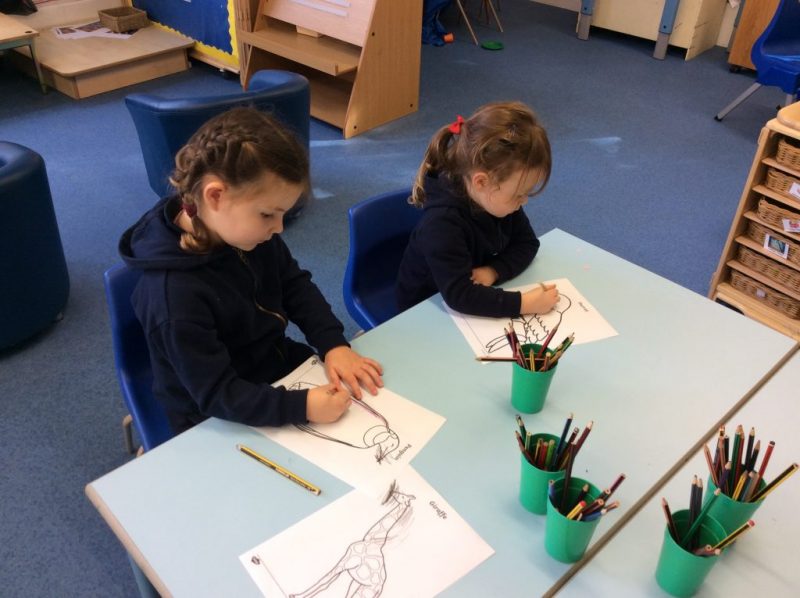 Finally the children each chose a different part of the world to recreate themselves using paint and pencils. These will be added to create our own representation of God’s World on our RE working wall.

Following on from our learning on the Creation story, the children have considered the importance of our role in looking after the world that God has created for us. The children decided that  one way in which we could do this would be by collecting rubbish from the school grounds, looking after our school community as part of God’s world.

This week the children have enjoyed learning about Nat Fantastic’s superhero adventures that he gets up to from his very own bedroom! The children have loved joining in with actions and key phrases and have began to retell the story in their own words. From this we have explored what they would like as their own Superhero names and powers. Next week we look forward to bringing these superhero characters to life! 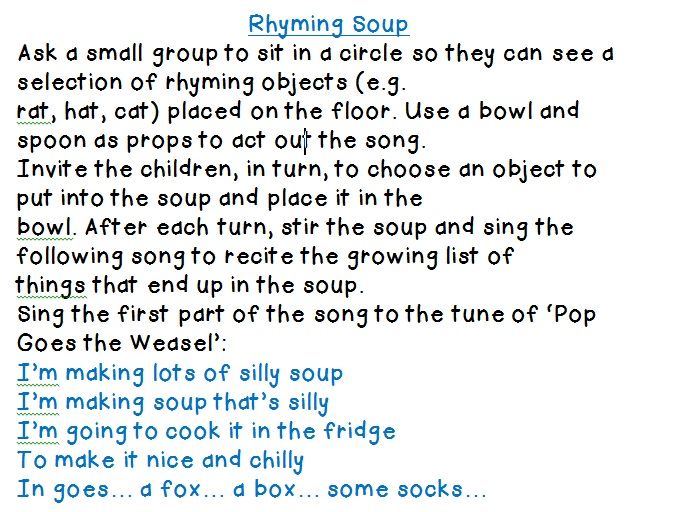 This week we continued our learning about Superworm! The children enjoyed identifying initial sounds of items from the story and matching it to the letter, using their phonics learning. 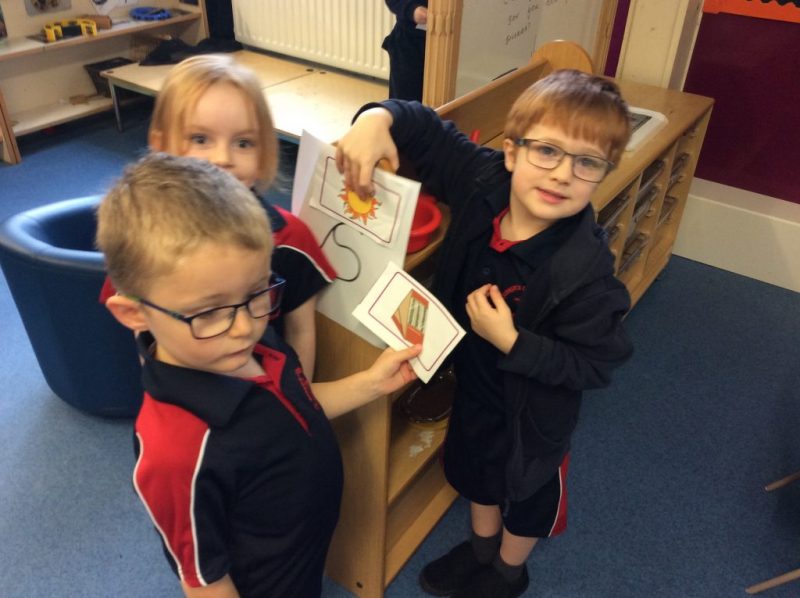 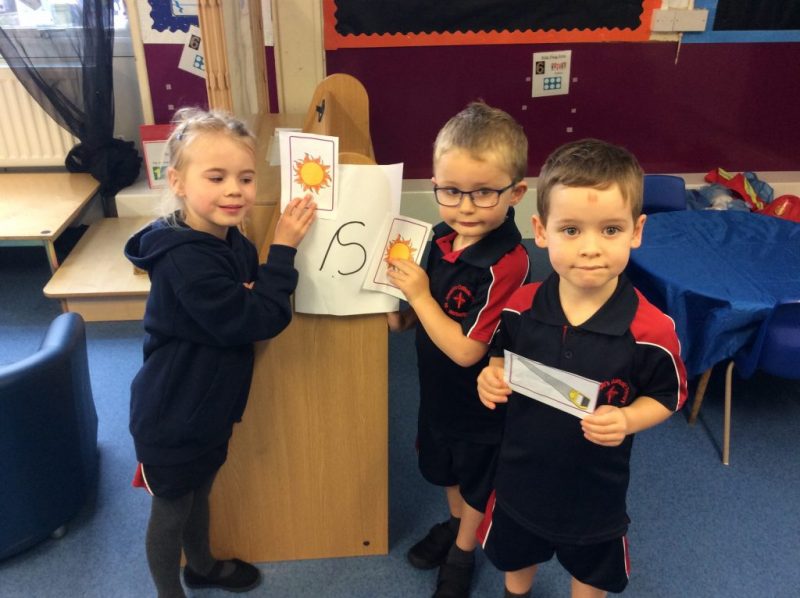 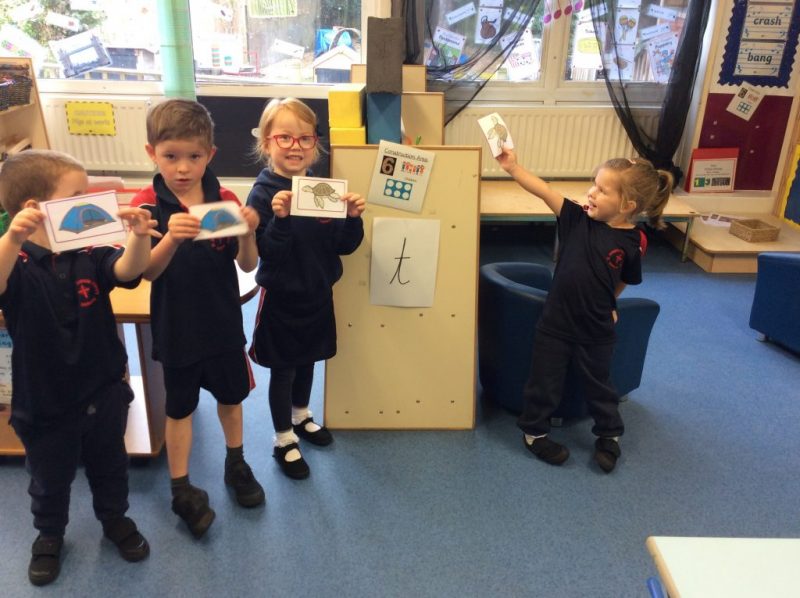 This week we have had an evil pea on the loose in FS2! The children have loved meeting the victim vegetables and seeing Super Tato save the day. As part of their learning the children have considered how each character felt at different points in the story and added key words and actions for each main character. 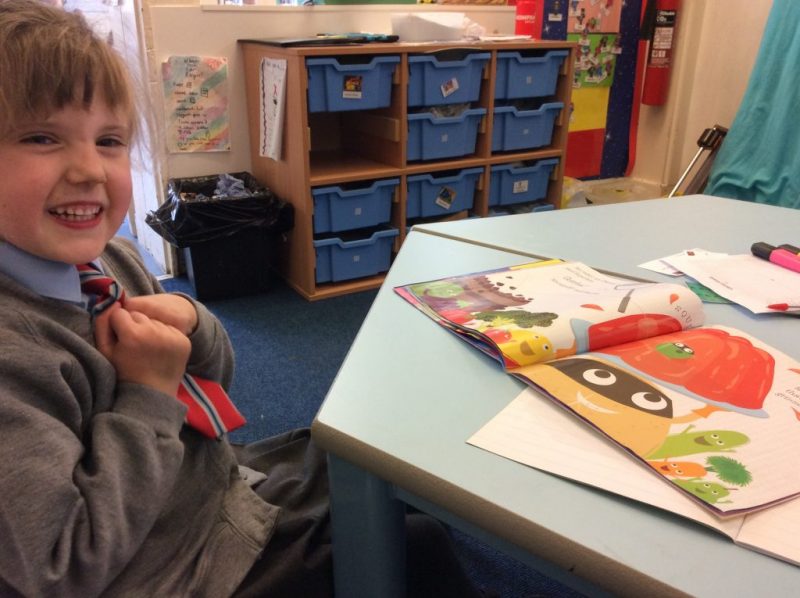 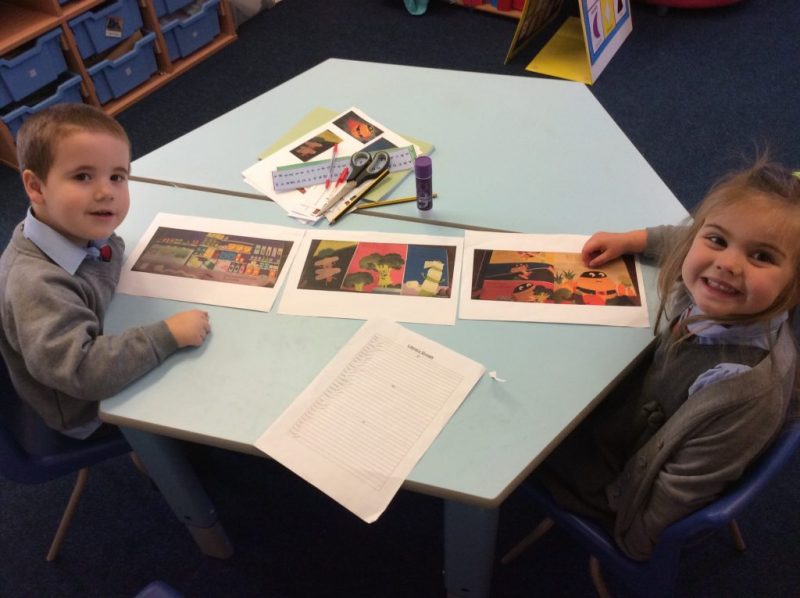 In their directed activity the children have sequenced part of the story and began to write words to describe how they think each vegetable felt in the story. Well done FS2, super learning!

This week the children have enjoyed giggling at Number 3 in Number Blocks as she has got in a muddle when trying to count accurately! The children have really impressed me with how well they were able to spot where Number 3 was going wrong and explain what she should be doing to count objects accurately. We have then began to apply this in our own Maths problems to help Nat Fantastic. We will continue this work next week and begin to look at numbers beyond 10.

This week we have been focusing on understanding what we mean by “the same”. We have explored this using objects initially and then challenged ourselves by exploring other ways of representing amounts such as numicon. This proved a challenge as numicon looks different to teddy objects so initially we thought that they weren’t the same even though they represented the same amount. However, after some practice the children all now have a good understanding of what we mean when we say “they represent the same”. Well done FS2!

Over the last few weeks Super Tato and his veggie friends have been helping us to understand “total”. We have been counting how many vegetables we have in total and then put them into different parts of the story, understanding that whichever way we split them the total is always the same. 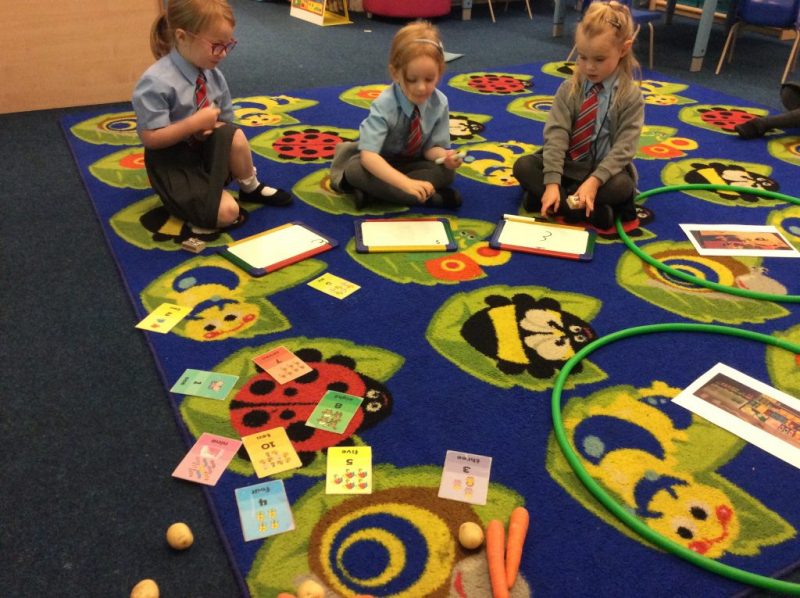 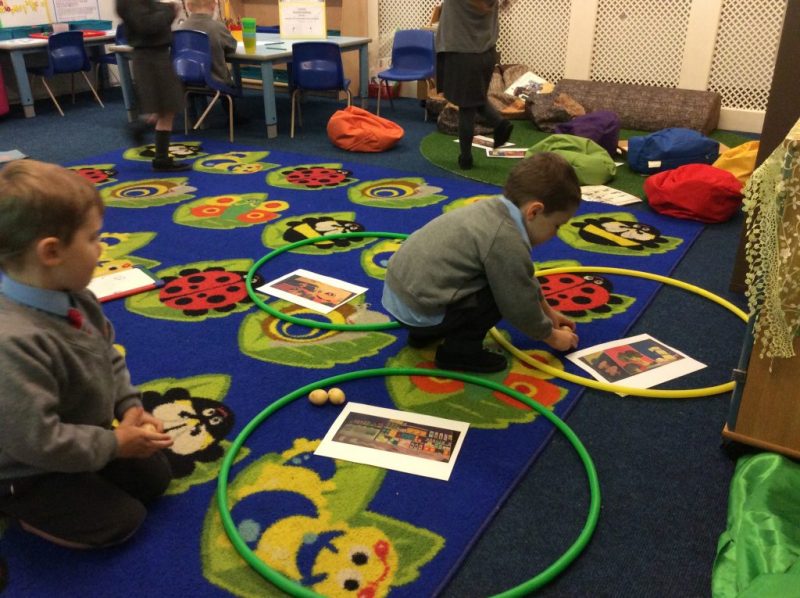 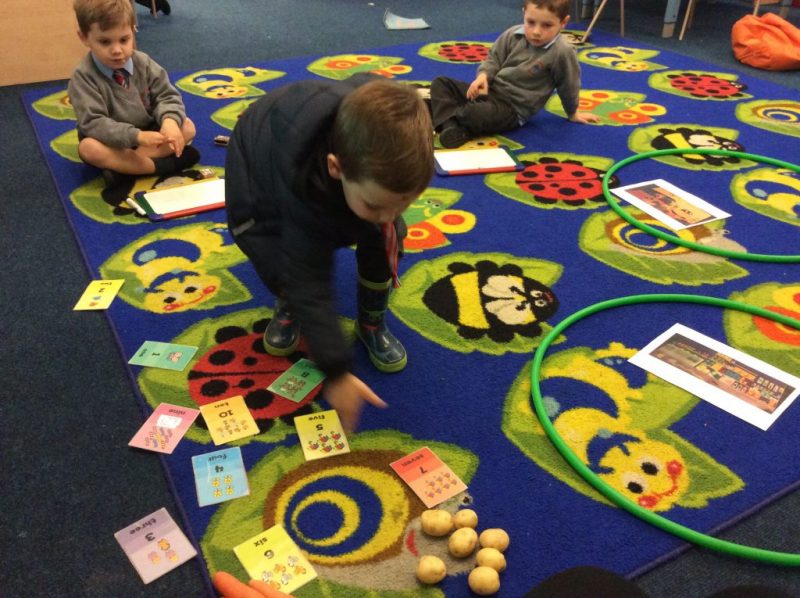 This week we have continued to embed the rules and routines in FS2 as the children complete their first full week! Together we have come up with class rules that we have all agreed to. We have also worked hard to get everyone to purple on the Super Learner Chart, along with filling our class bucket.

We have also been impressed with how well children are sharing and showing kindness towards others and making new friends as a result! Well done FS2, a very successful first full week.

This week we have learnt from Pantosaurus that our pants are private. We have talked about our pants covering our private parts and times like going to the toilet or getting changed as private time that we should do by ourselves. We have also talked about what to do if something worries us and we agreed to tell an adult that we trust. This can be both at home and at school. The children loved singing along to the song with pantosaurus! 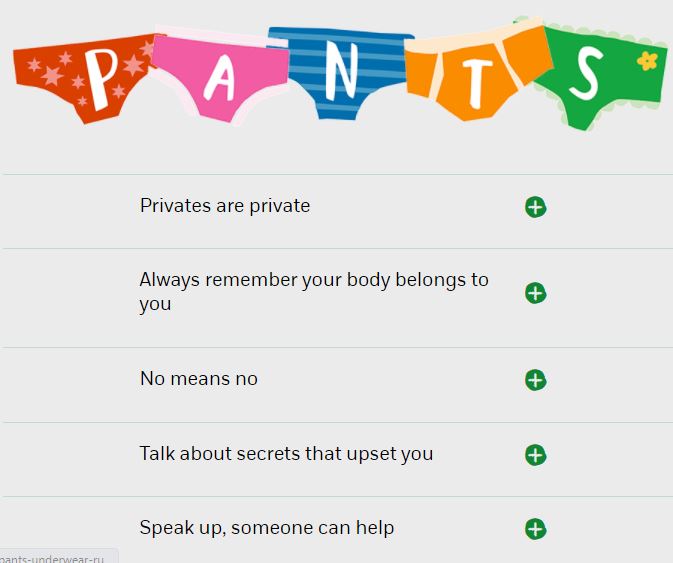 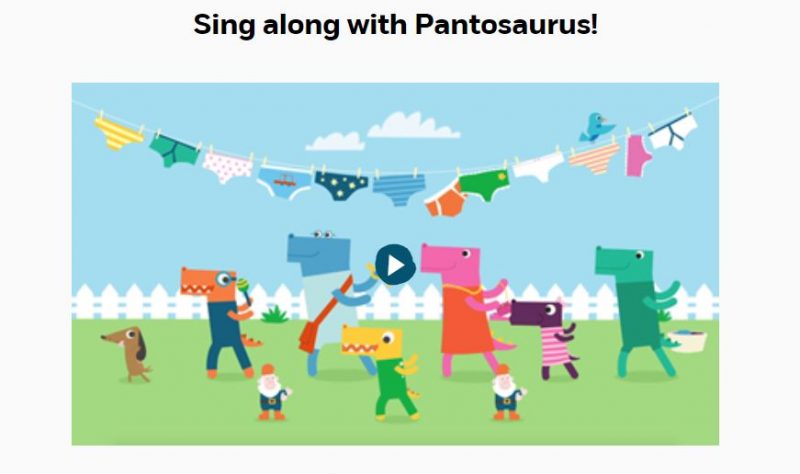 This week PE has all been about following instructions! The children have worked really well to listen carefully and follow the instructions as best as they can! This involved playing “do this do that” along with throwing different coloured balls and moving to different coloured areas, both running and hopping! Parents please see Tapestry for the full observation with photos.

The children have loved practising their football skills over the last few weeks. We have been so impressed by their passing skills and stopping of the ball! 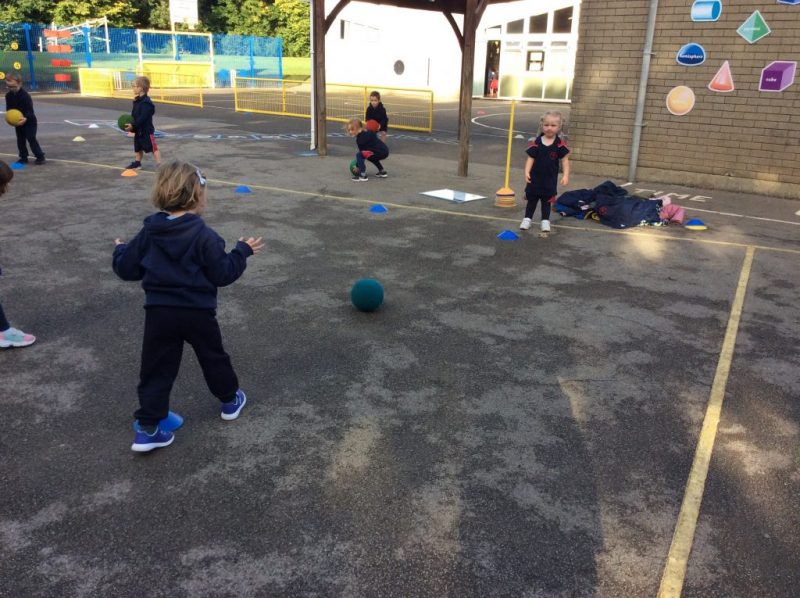 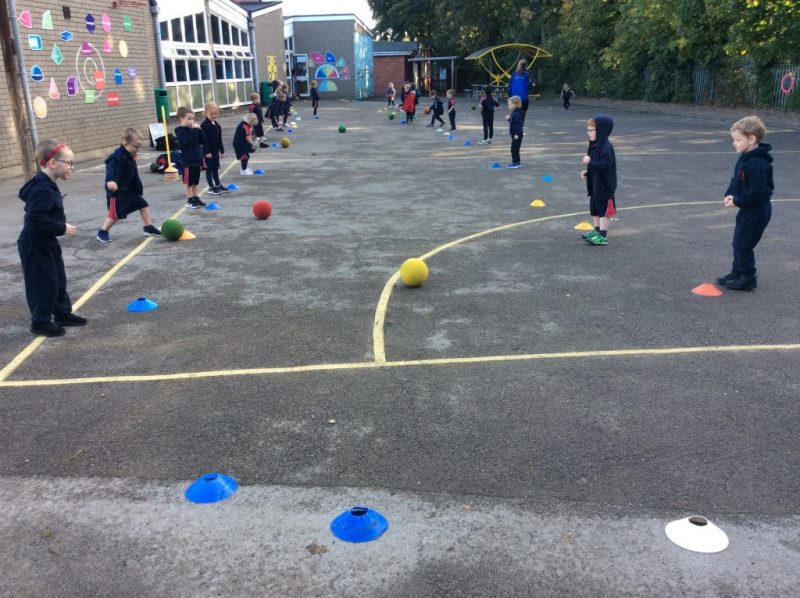 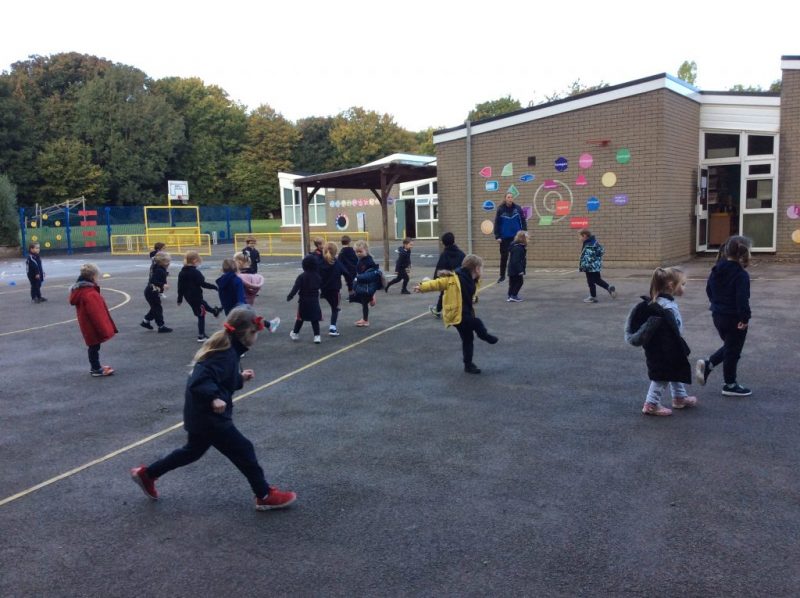 Exploring media and materials in provision

The children have had lots of fun getting creative in the different provision areas this week! We have had superhero masks and capes being made, along with painting themselves as superheroes as children have completed the rainbow challenges. We have also had children following their own interests making sweet boxes and flowers to take home to their families!

Not all Superheroes wear capes!

This half term the children have enjoyed exploring their new music areas both inside and out! We have had lots of wonderful performances of familiar songs played alongside instruments. The children have also enjoyed developing their own songs based on familiar characters from our Superhero stories. 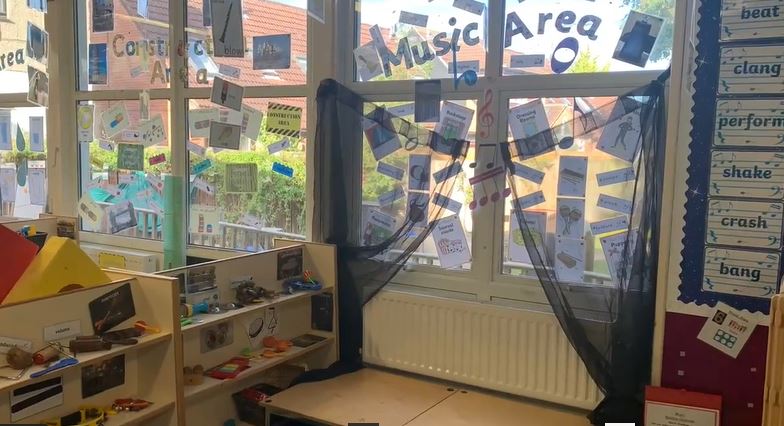 Next half term the children are looking forward to directed music sessions with Mrs Hutchinson where they will explore a range of beats and instruments.

Exploring ideas and concepts in provision

This week the children have enjoyed using the magnets to decide which items are magnetic and which are not as part of the investigation challenge. We also had children following their own interests outside, planting seeds and bulbs in the flower bed and watering them each day to help them grow. We can’t wait to see them start to grow!

In our outdoor area lots of children have been searching for worms and ladybirds following our story of Superworm! This gave me the idea to go and explore the woodland area to see what other mini-beasts we could find.

So Thursday afternoon we set off on our mini-beast hunt. We each had a checklist that we went through before we set off, that we used to help us find as many creatures as we could. When we got to the woods we went through some safety rules, such as staying on the flat, not climbing the banking, going as far as the last tree and making sure that you ask for an adults help lifting rocks to see what creatures were underneath. The children all then excitedly started their hunt, looking carefully in different places and calling their friends over to look when they found a creature. It was very exciting and lovely to see the children help each other to find the mini-beasts. A very successful afternoon bug hunting!

Following on from our Mini-Beast hunts the children were keen to make homes for the Mini-beasts that they had found. The children had lots of fun ensuring that they had everything they needed, including beds and food. 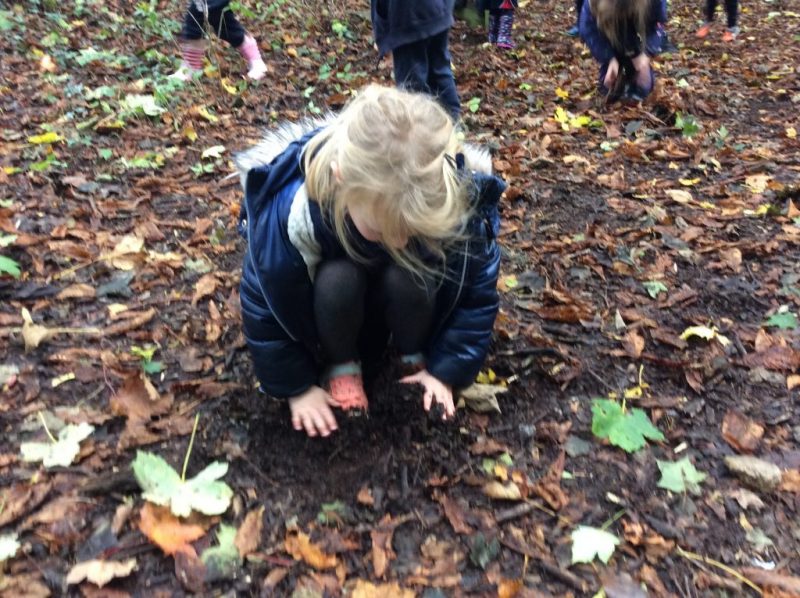 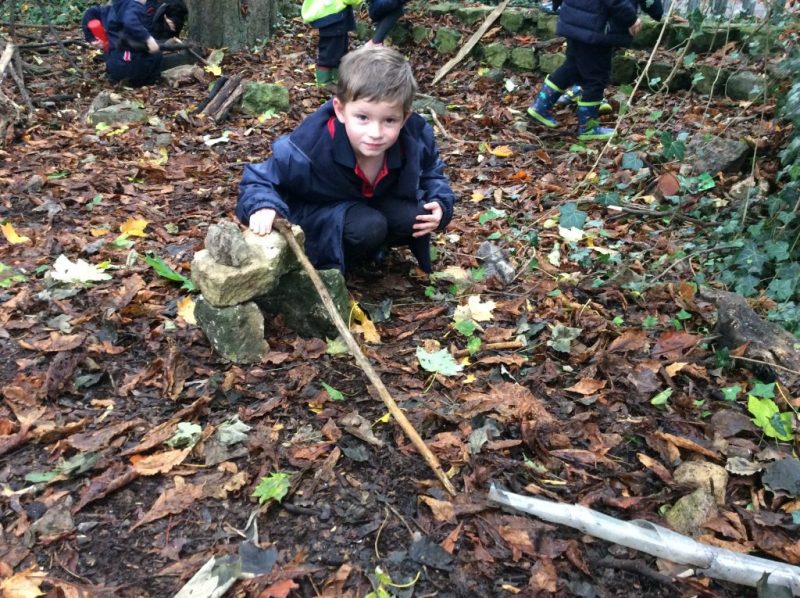 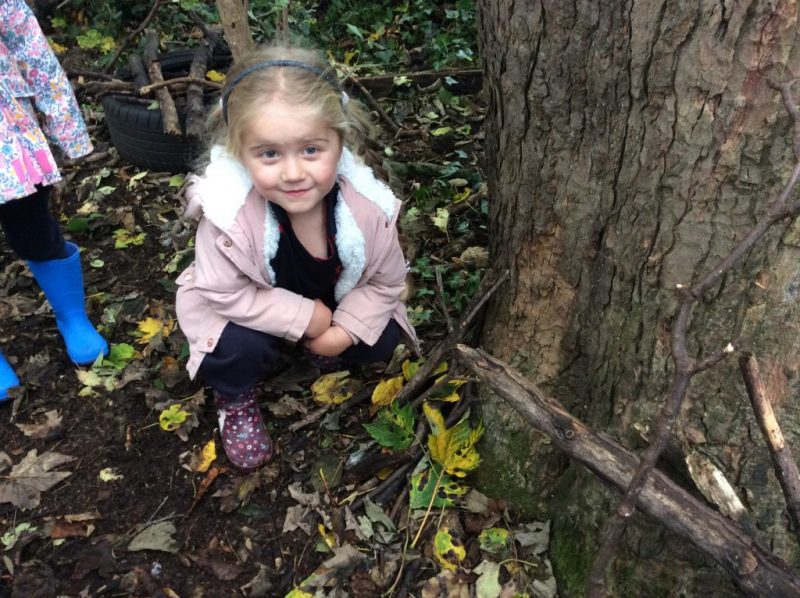